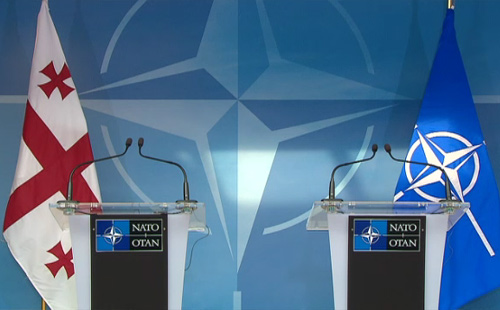 Georgian officials started to build momentum for the NATO Membership Action Plan (MAP) to be granted during 2016 Warsaw summit. Civil.ge asked several foreign policy analysts if there are any grounds for optimism.

Derek Averre – a senior lecturer in Russian Foreign and Security Policy at the Centre for Russian, European and Eurasian Studies of the University of Birmingham and CASCADE coordinator of work package 2 on ‘Reconceptualising democracy and security in the Caucasus’.

My sense, based on recent sources and discussions with academics looking at NATO policy, is that NATO’s ‘transformative mission’ in the East has stalled for sometime. The likely provocative effect in Russia and the risk of generating a serious ‘security dilemma’ by offering Georgia a membership prospect is not one that the U.S. and European leaders are prepared to risk at the moment.

There will be activity with Georgia in such areas as defence education, security sector governance, capability development, capacity-building, etc, but the prospects for NATO accession are very slim.

The defence spending pledges made at the Wales summit are probably not going to be achieved by some countries, and at present attention is focused on the Baltic region. The NATO Response Force has struggled to meet the demand for manpower quotas or obtain a clear operational role, and the Very High Readiness Joint Task Force, a modest contingent not permanently based in Eastern Europe, will only be sufficient to provide assurance to the Baltic states as the Ukraine conflicts persists; this is about the limit of NATO’s current ambition, unless there is a sudden and unforeseen escalation with Russia. Other commitments in the Wales summit document, such as greater NATO-EU defence cooperation, are long-term affairs with questionable chances of success. There are still differences among NATO (and EU) member-states about threats and risks and so there is unlikely to be a ‘paradigm shift’ in NATO thinking in the short-medium term.

Helen Khoshtaria – chairperson of board of Tbilisi-based think-tank Georgia’s Reforms Associates (GRASS); she was deputy state minister of European and Euro-Atlantic integration

Looking at NATO members’ stand, I don’t think one can be very optimistic. This does not mean Georgia shouldn’t be pushing for MAP. First of all, NATO is now living through the process of realization that Russia represents a threat to Euro-Atlantic security. This was not the understanding before the war in Ukraine. There were several attempts to engage Russia, taking into account some of its concerns – whether legitimate or not. They [NATO allies] were trying to get them [Russia] into the dialogue, including on security issues in our region as well. Now these illusions are over and the level of understanding of security challenges of Georgia, Ukraine is much higher.

At the same time, they [NATO allies] don’t have the final answer on how to respond to this new threat from Russia. There is no consensus whether to move forward with enlargement or to wait a while.

In this process of thinking that NATO is going through, it is important to weigh those arguments that speak for NATO enlargement. And such arguments exist – the idea of Europe whole, free and at peace of late 1980s and the early 1990’s which brought, despite a difficult political environment in Europe, peace, development and prosperity [to Eastern Europe]. This enlargement serves as a good example that despite some opposition, despite some conflicts that exist it is in shared interest to bring more security.

Jos Boonstra – head of Eastern Europe, Caucasus and Central Asia programme at FRIDE and CASCADE coordinator of work package 8 on the ‘Caucasus and the wider neighbourhood’.

NATO Secretary General Jens Stoltenberg praised Georgia for its reform efforts and its contributions to NATO missions. This, however, is no indication that European partners are keen to discuss Georgia’s potential NATO membership over the coming 12 months.

Defence reform gathered pace after April 2008, when the NATO Bucharest Summit promised Georgia membership, but did not grant MAP. From a technical point of view there might be little reason to withhold a MAP now, especially in the wake of continued public support for NATO membership. Political and strategic realities, however, show a different picture.

The situation in Ukraine did little to change the Western perceptions. Russia will perceive a MAP (and eventual Georgian NATO membership) as a threat. One cannot exclude increased Russian pressure during the MAP phase that can last for many years: in the form of blockades that could affect the Georgian economy and labour migrants; military maneuvers in the Black Sea; and increased tensions in Georgia’s regions, including the risk of violence. It seems unlikely that NATO will want to aggravate Russia and extend instability from Ukraine to the Caucasus, also since there are fears that the Russian regime could suffer from instability over time.

Granting a MAP would thus almost imply first having NATO boots on the ground as a deterrence. This option seems now unlikely.

In this sense, Georgia can do little but continue with reform (that are needed in any case) and further encapsulate itself in the EU and NATO security structures. Georgia’s earlier contributions to NATO’s ISAF mission in Afghanistan and to the EU’s current Common Security and Defence (CSDP) mission in the Central African Republic have not gone unnoticed. Clearly, the expanding ties with the EU through an Association Agreement and continued cooperation with NATO already make Georgia a European country closely participating in and cooperating with the Euro-Atlantic Community. Whereas this does not offer a hard article 5 security guarantee, it does help Georgia in its democratic, economic and security development long-term.

Davit Sikharulidze – chairman of the Atlantic Council of Georgia; he was Georgia’s defense minister in 2009.

There are two aspects. One is whether the Alliance itself is ready and another one is what Georgia has to do to disarm skeptics’ arguments and to strengthen the arguments of those NATO members, who are more supportive of Georgia’s membership.

The MAP is just a technical tool – it has been overly politicized. There are number of things Georgia has to do and among them should be a well-coordinated and clear strategy of the government on how to get there [to MAP], as well as carrying out further internal reforms. It will strengthen Georgia’s case in regards to integration.

There is, of course, another issue – whether the Alliance will be able to reach the consensus on timetable. The allies should be more forward-looking. Russia says that by invading Georgia in 2008 or Ukraine now, it is preventing NATO expansion. It would be more reasonable right now if the allies get united behind the idea that this is not the right way of influencing European affairs and therefore NATO enlargement should definitely be part of the 2016 summit agenda.