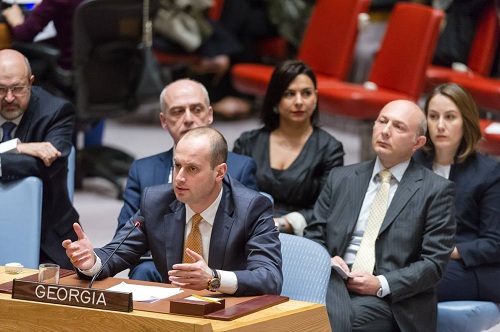 The February 21 UN Security Council Open Debate on Conflicts in Europe, focused primarily on the situation in Ukraine, but touched upon other European conflicts as well, including that of Georgia.

Speaking on Georgia, UN Secretary General António Guterres, who was the first to deliver his debate briefing, said that “the crises” in Georgia and Ukraine “show that Europe remains at risk from new outbreaks of conflicts.”

“The United Nations fully supports the Geneva International Discussions,” he stated and urged its participants “to demonstrate the political will to find creative solutions for the benefit of all.”

“Some progress has recently been made, including on humanitarian issues, but much more should be done on key peace and security issues,” he also said and added that agreement on the non-use of force, freedom of movement and on internally displaced people “is an urgent need.”

Georgia also featured in the briefing of OSCE Secretary General Lamberto Zannier, who noted that the organization has not managed to restore its presence in Georgia since 2008.

He, however, underlined that the OSCE’s “strong relations” with the UN provides “a solid basis” for further development of their joint activities in Georgia.

“We work closely together with the UN and with the EU as co-chairs of the Geneva International Discussions, and as co-facilitator of the Incident Prevention and Response Mechanism meetings in Ergneti,” Zannier explained.

The OSCE also contributes to confidence-building in the region through targeted initiatives on the ground, according to the Secretary General.

Ukraine’s Foreign Minister Pavlo Klimkin, the Security Council’s current president, said in his statement that “the Russian aggression against” Georgia in 2008 became “a litmus test for European security.”

“It was a warning sign that was not heeded,” he said and added that “the aggressor, being just slapped on the hand by the international community, took this as a green light.”

“Had the lessons from the 1938 Munich agreement not been learned? Today it is obvious — not well enough. Appeasement of aggressors and lack of consequences merely encourage more aggression,” he stated.

“In many conflicts, multilateral organizations are hindered from fulfilling their role. In Abkhazia, the UNOMIG mission was terminated and other institutions are not allowed meaningful access. The Geneva international discussions must continue,” it added.